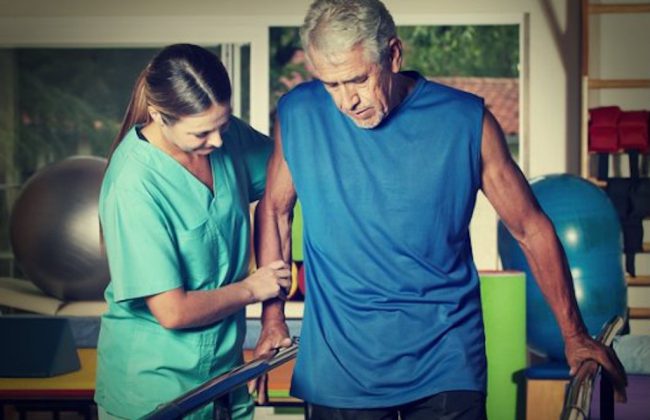 Parkinson’s disease is a heterogeneous disease, it does not affect two individuals in the same way, nor does it manifest itself with the same symptoms in some as in others. Furthermore, there is no correlation between evolution time and symptoms. Age plays a very important role, we will say that the later the appearance of the disease, the more benign its evolutionary course will be.

Olfactory capacity is reduced in the early stages. Non-motor symptoms limit more than motor processes, such as: difficulty in expressing yourself verbally, cognitive decline, depression.

These patients have lost automation, so it is important to them that they perform extensive, repetitive, rhythmic, and harmonic active movements.

We apply the following treatment to our patient, divided into two types of sessions:

1. Breathing exercises: Breathing must be present throughout the session, so they are performed at the beginning, during the other exercises and at the end of the session. We promote diaphragmatic breathing through exercises.

2. Joint mobilization: They are carried out analytically, joint by joint, and we perform them in a sitting position:

3. Coordination exercises: We work in a sitting position due to the impossibility of working standing with these specific patients. We perform ball tosses and exercises with alternating movements of legs and arms.

4. Basic cognitive session: The main objective is to improve the subject’s level of communication, as well as to stop mental deterioration as much as possible.

We carried out this work in collaboration with the psychologist, while each of the patients received individual physiotherapy in Dwarka.

Two cognitive techniques are distinguished inside and outside the sessions:

There seems to be a tendency to believe that regular (aerobic) physical exercise is beneficial. for patients with Parkinson’s disease, as it reduces symptoms such as hypokinesia, bradykinesia, gait disturbances, neuronal degeneration; being then recognized as a tool that helps treatment by medication.

INDIVIDUAL SESSION: This work session was directed to the needs of the “special”, let’s call them this specific patient.

1. Rehabilitative treatment of Dupuytren’s Disease: The exercise program consists of flexion and smooth passive and active extension of all the finger joints. Full flexo-extension movement patterns of all the fingers, including the thumb, and also the wrist were emphasized, as there is movement restriction at this level as well.

With physical therapy, we aim to preserve, and if possible, increase the mobility of the arm, trying at least functional movements for the life of the patient, such as shoulder flexion and abduction, and elbow flexion.

3. Techniques of motor unlocking: Only with the voice command and the mark of the steps by the physiotherapist in Dwarka simulating a military march, it served the patient to overcome the blockages when walking. At the end of the physiotherapy session, we accompanied the patient to the car that transported him to his home, carrying out this activity, thus speeding up the walk of the old man.